The beach guide has 190 beaches listed in South Wales.

From the major cities of the south coast to the UK's only coastal national park, South Wales has plenty to offer any sea-lover.

Newport and Cardiff, Wales' capital city, were once busy ports, shipping out thousands of tons of coal each year. Cardiff's docks have since been re-developed into a thriving tourist hub, while the nearby resort town of Barry boasts a permanent funfair and access to a delightful stretch of coast that extends west to Porthkerry.

Swansea is a lively maritime city with an excellent beach and easy access to the Gower, a fifteen-mile-long peninsula with some of the best beaches in Wales and good opportunities for surfing and windsurfing.

Tenby, a picturesque town that dates back to the Norman Conquest, marks the start of the Pembrokeshire Coast National Park, famous for unspoilt sandy beaches such as St Bride's Bay, which runs for miles along the rugged cliff-lined coast, rare birds such as Choughs, Skylarks and Stonechats and offshore islands such as Caldey Island, home to a Cistercian monastery and a large community of seals. The Pembrokeshire Coast Path runs from Tenby to Pembroke, a small town with a huge castle.

Milford Haven was established as a port in the eighteenth century and quickly became home to the UK's sixth largest fishing fleet. The decline in fishing has been compensated for by growth in the oil industry, with several refineries being built along the Haven.

Fishguard is a small town with a pleasant quay area where small cottages crowd the waterfront. The tiny town of St David's is famous for its huge cathedral, said to house the remains of St David himself, Wales' patron saint. Cardigan, on the River Teifi estuary, is a small market town and resort whose main claim to fame is James Thomas Brudenell, seventh Earl of Cardigan, who led the Charge of the Light Brigade at the Battle of Balaclava in 1854 and established the item of clothing now known as the cardigan. 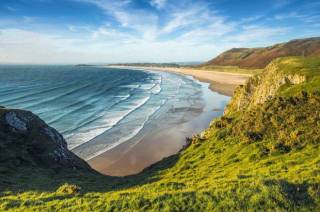