The beach guide has 24 beaches listed in Isle Of Man.

The Isle of Man is a self-governing kingdom with its own parliament, laws and traditions. Just thirty three miles long and thirteen miles wide, the island has nearly a hundred miles of coastline, numerous excellent beaches and a wide variety of habitats and geography.

The legislative buildings of the ancient parliament are in the capital town of Douglas, which sits on the edge of a sweeping, crescent-shaped bay. A promenade, complete with a horse-drawn tramway, runs almost the entire length of the beachfront, backing a sandy beach that is very popular with families and home to a thriving yacht club. A long-distance footpath called the Raad ny Foillan (Road of the Gull), runs right the way around the Manx coast, taking in the shingle beaches in the north, the cliffs above the sloc (stacks) in the west and the coastal sward at Scarlett, near Castletown, in the south.

Castletown Bay, close to Ronaldsway airport, is a horse-shoe shaped bay with near-perfect windsurfing conditions. Other fine sandy beaches can be found around the nearby and much-photographed Port Erin, a quiet town that has been a tourist resort since Victorian times. Excursions to Calf of Man, a smaller, almost uninhabited island, that is home to a breeding population of Manx Shearwaters, leave from the small harbour in Port Erin.

Peel, on the west coast, dubbed Sunset City for its spectacular sunsets, was once the island's main fishing port and is still its only city. Peel has two sheltered beaches, one of which, Fenella, is overlooked by the impressive Peel Castle. Between Peel and Port Erin is one of the Isle of Man's most beautiful stretches of coastline, offering spectacular views of the Calf of Man and the Irish mountains. 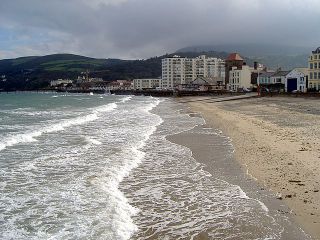