The beach guide has 107 beaches listed in North Scotland.

Sparsely populated, with an often hostile climate, the coastline of Northern Scotland consists of a large area of unspoilt scenery clinging on to the edge of Europe.

Heading north from the Moray Firth, on the east coast, the low-lying landscape becomes increasingly dramatic, with spectacular cliffs, swirling seas and rugged offshore islands. John O'Groats is billed as the most northerly point on the British Isles, although the wilder and less commercial Dunnet Head contests this title. Dunnet Head lies between Thurso and Wick, the main settlements on the north shore. Both towns are folded around small harbours and still depend largely on fishing for their survival, although tourism plays an increasingly important role. Every surfer will have heard tales of Thurso East, a heavy reefbreak that is firmly on the world surfing map, despite the frequently freezing conditions.

Dunnet Head and Duncansby Head, famous for its spectacular offshore stacks, provide excellent views of Orkney, where numerous ancient stone circles offer a pleasing alternative to much-visited and better-known sites such as Stonhenge. A little further west, Faraid Head offers great views of blustery Cape Wrath, the most north-westerly point in Britain, accessible via a boat and minibus from Keoldale. Some of the best whale-watching in Scotland can be found off the coast of Gairloch, one of a handful of smallish villages on the north west coast, where the only real town is Ullapool.

Regular ferries depart from Ullapool to the Inner and Outer Hebrides, a chain of inhabited and uninhabited islands with a diverse coastal culture and landscape all of their own. 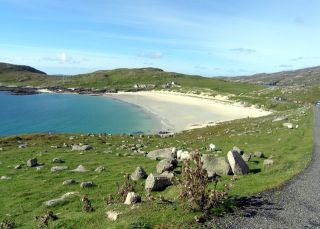