The beach guide has 112 beaches listed in North East England.

The coastline of North East England is among the country's most rugged and charming. Major port cities such as Grimsby, Hull and Newcastle are interspersed with rocky cliffs, windswept beaches, quaint fishing villages and bustling, family-friendly resort towns.

Hull's maritime heritage dates back to Roman times and continues to evolve, with a fishing fleet, ferries, oil tankers and cargo ships docking regularly. A recently redeveloped marina and a stunning millenium building telling the story of the world's oceans, with the deepest acquarium tank in Europe, are both helping to put Hull on the tourist map. The three mile stretch of sand and shingle, known as Spurn Head, that leads to the mouth of the Humber estuary, is an important resting place for migratory birds.

Hornsea and Withernsea are good shingle beaches north of Hull, with Withernsea stretching all the way to Bridlington, twenty miles further north. Just north of Bridlington is the spectacular Flamborough Head, a chalk headland that sticks out in proud contrast to the rugged shale cliffs either side.

The attractive resort towns of Scarborough and Whitby are both located within a designated heritage coast area, with Scarborough claiming to being the first seaside resort in Britain, with a history of sea-bathing that dates back to 1660. Just south of Whitby, Robin Hood's Bay is a famously picturesque village where steep cobbled streets lead down to a large rocky beach with excellent rock pooling.

Northumberland is the least densely-populated area of England, characterised by vast white sandy beaches, castles and unspoilt countryside. Lindisfarne, also known as Holy Island, and accessible only at low tide, is steeped in history and located within an Area of Outstanding Natural Beauty. 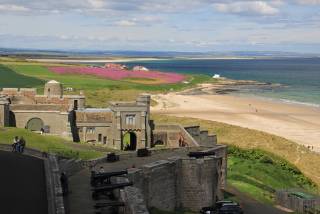