The beach guide has 58 beaches listed in North West England.

Extending from the Welsh to the Scottish borders, the North West is the third most populated region in England. Usually associated with sprawling urban centres, such as Liverpool and Blackpool, the coastline of North West England shelters surprising pockets of wild loveliness, such as the Solway Coast Area of Outstanding Natural Beauty, which stretches all the way from the historic harbour town of Maryport to the Scottish border, covering most of the Solway Firth, England's largest estuary.

Liverpool was once one of the busiest ports in the world. Although the seafaring industry has declined, some of the docks have been beautifully restored, as have landmark Victorian buildings such as the Liver Building, on the Mersey waterfront. On the opposite side of the Mersey is the Wirral Peninsula, with unspoilt countryside, sandy beaches, picturesque villages and the industrial port of Birkenhead. Stretching for twenty two miles from Liverpool to the traditional seaside resort of Southport, dubbed England's golfing capital, is the unique Sefton coastline, the largest area of undeveloped dunes and coastal woodland in England.

Officially the UK's busiest resort, Blackpool is England's answer to Las Vegas. Miles of amusements culminate in the Pepsi Max rollercoaster, Europe's biggest and fastest ride. Just north of Blackpool is Morecambe, a traditional seaside resort that marks the start of The Cumbria Coastal Way, a long distance footpath that stretches one hundred and eighty two miles to Gretna, on the Scottish border. The small fishing port of Workington, where cod, mackerel, whiting and prawns are still landed on a regular basis, offers easy access to the Lake District National Park, sitting as it does at the mouth of the Derwent River, which rises at Bassenthwaite Lake, about fifteen miles inland. 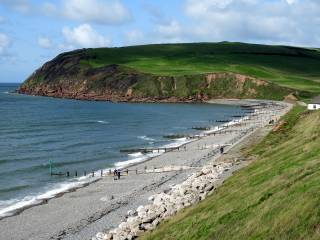