The beach guide has 109 beaches listed in Republic Of Ireland.

Ireland's three-thousand-kilometer coastline is a place of stunning variety. The wild west, with its massive cliffs and huge waves sits in contrast to the more sheltered east, with its energetic and cosmopolitan cities, pretty villages and sheltered bays.

Dun Laoghaire offers great views over Dublin Bay, while the fine sandy beaches of Wicklow, known as the 'Garden of Ireland' are great for families.
Wexford is home to the oldest operational lighthouse in the world, at Hook Head, while Waterford, on the sunny south coast, offers an ideal mix of pretty villages, mountains and beaches.

Cork is the biggest county in Ireland, boasting a rugged west coast, attractive towns such as Clonakilty and popular surfing beaches such as Inchydory, located on an island connected to the mainland by two causeways.

The peninsulas of Kerry are renowned for their excellent spas, while Clare is home to one of Ireland's top tourist attractions, the towering Cliffs of Moher, which belong to the UNESCO-supported Global Geopark Network and attract close to a million visitors every year.

Galway's Aran Islands host some remarkable ancient coastal forts such as Dun Aonghusa, said to be one of the finest prehistoric monuments in Western Europe. The Shannon estuary is great for dolphin spotting, while Ireland's largest offshore island, Achill island, has truly breathtaking coastal scenery and Rockfleet Castle, once the home of legendary female merchant and pirate, Grace O'Malley, who is said to have controlled three galleys and two hundred fighting men.

Sligo and Donegal are top surfing destinations, boasting world-class breaks, pristine beaches and a crooked coastline that provides offshore conditions in just about any wind. 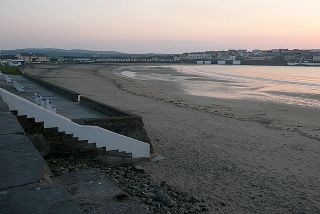