The beach guide has 31 beaches listed in Northern Ireland.

The Northern Ireland coastline is one of Britain's hidden gems, with over two hundred diverse kilometers in the care of the National Trust, much of it contained within one of two Areas of Outstanding Natural Beauty. The Causeway Coast, on the North Antrim coast, contains the world famous limestone columns that make up the iconic Giant's Causeway, Northern Ireland's only World Heritage Site. Further exciting caves and arches, such as Shelagh's Head, Elephant Rock and the Lion's Paw, are to be found at Whiterocks Beach, along with cavernous caves that are accessible only by sea. The caves are home to a variety of seabirds and a popular hunting ground for hawks.

Just off the north coast, and easily reachable by ferry, is the wild and rugged Rathlin Island, lying just twelve miles south of Scotland's Kintyre peninsula. Home to around seventy people as well as seasonal populations of Puffins, Guillemots, Razorbills and Kittiwakes, Rathlin is an excellent place to escape the crowds and indulge in some serious peace and tranquility.

County Londonderry contains the popular seaside resort of Portstewart, close to the excellent Portstewart Strand, a two mile stretch of golden sand, backed by dunes. Another excellent beach can be found near the tranquil resort of Castlerock. The dunes here are among the oldest in Ireland and extend upstream to a National Trust bird sanctuary.

The island and foreshore of Strangford Lough, in County Down, have long been noted for their archaelogical and historical importance. Fish traps, kelp grids, shipwrecks and submerged forests are among the features protected by the Strangford Lough conservation area, where the importance of the abundant wildlife is internationally recognised. 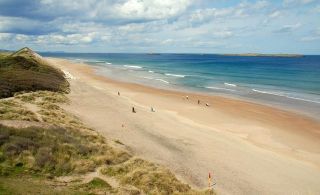