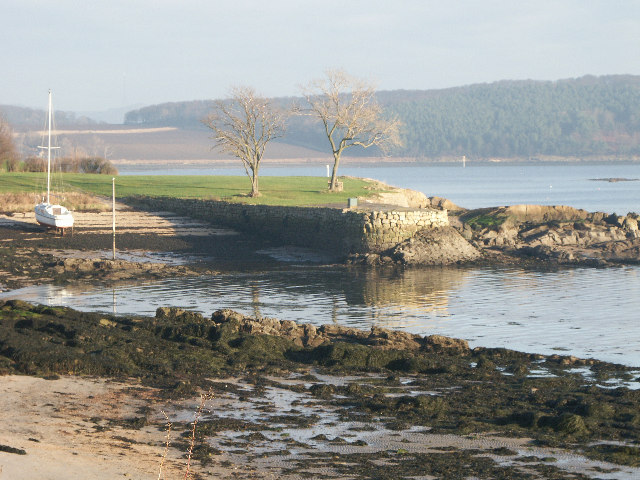 The Harbour and Pier at Donibristle

(Earl of Moray's private harbour) The Earl of Moray used a harbour at the east end of Donibristle Bay up until the early 1800's. Thereafter he constructed this, a "new harbour", a few hundred metres to the east near the stables to berth his yacht. I would have assumed that the original harbour would have been called "The Harbour at Donibristle" and subsequently when he built his new harbour he would have referred to it as his new harbour and the previous one as his old harbour. Though it is named "New Harbour" on the current OS maps, on the old OS maps the two different harbours are shown - one called "old harbour" and one called "new harbour". Now that the old harbour is no more, the use of the name "New Harbour" seems a bit silly. What're they going to call the next one? "New New Harbour"? Looking toward Dalgety Bay and the Braefoot Plantation. Taken from the Fife Coastal Path at the Old Coach House. ........ The OS says it will ensure that "common usage and evidence provided by historical form are both considered when defining the spelling and/or depiction of a name." ........ However my word of caution here: As regards the naming of this harbour....There's an old tale about a surveyor who once was out checking a piece of land in the middle of nowhere. He came across a remote house and, as it was not listed anywhere on current plans, he decided he would map this little house and give it recognition on the national map. He used his thodolite and level to correctly pinpont the little house and made a few other notes for good measure. He saw a plate on the gate on which was inscribed the words "Cave Canum". He whizzed back to the office and plonked the details on the cartographer's desk. The little house, before long, became featured on the modern maps of the day. It was shown as "Cave Canum" which, for you non-latin scholars, means "Beware of the Dog".

© Simon Johnston and licensed for reuse under this Creative Commons Licence